My explorations of visual art were inspired by the work of Leonora Carrington, Max Ernst, Méret Oppenheim and especially Francis Picabia. "The role of aesthetics in problem solving: Some observations and a manifesto" (JETAI, 2004) discusses art-making as a problem solving process that blends cognition and emotion (send email to fieldsres@gmail.com to request a reprint).

The works reproduced below were exhibited in 2004 and 2005. Artist's statements that accompanied the public exhibits are included.

Everything you see has already happened

There is no process of deciding

Anything can happen in between


These paintings celebrate ephemerality and ambiguity. I imagine them to be illustrations from a textbook on the theory of knowledge, depicting the operations by which the brain identifies objects and traces their motion. They mock our forgetfulness, our disregard and lack of sympathy for the effort and risk involved in our illusions of order and progression.

I wish to show the world as absolutely innocent. Within this world, identity is impossible.

The titles are written on the paintings using a digital code. Writing with only two characters enables the text to escape recognition absent specific attention and an effort at decoding. The world has become too full of signs. It is more restful, but also more exciting, to inhabit a world in which the presence of communicative intent can only be guessed.

Summer, 2003 was unmercifully dry. Painting the river evoked its life from the dust.

The river appears, experiences, dissipates. These days, it experiences a good deal of us; we want more from it, on an average day, than it wants from anyone. The water is not bothered by these intrusions. One day it is up in the air, the next underground, then on the ground, then in the air again. Up, under, on, up: over and over, now and then skipping a step - why not? All that changes is the closeness of one's neighbors.

We people could live this way. But we don't. 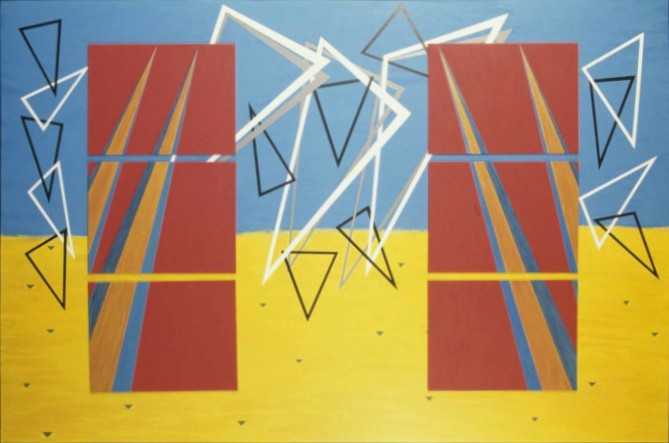 Acrylic on unstretched canvas and hardboard, iron, 2' by 4'. Exhibited at an open studio event, May 1, 2005. Whereabouts unknown.

Overlaid on a vaguely oriental abstraction, seven repetitions of the phrase "There is no afterlife" followed by my favorite hexagram, #25 Innocence.

A completely innocent world is full of curiosity, but utterly lacking in interest.

The text can also be read as 50 hexagrams, presented horizontally. The first is # 18 Decay; the last is #61 Truth.

This reading of Litany inspired the use of hexagrams in Dialog one year later.

Acrylic on canvas and hardboard. Two panels, each 21" by 27". Exhibited at an open studio event, May 1, 2005. Whereabouts unknown.

According to legend, Tristan Tzara first met Francis Picabia in a hotel room in Zurich, as Picabia was enthusiastically engaged in disassembling his alarm clock, inking the gears, and printing them onto paper. Alarm Clock I and II (1919) resulted from this exercise.

The main gear in my depiction quotes Picabia's dictum, "We are not responsible for what we do (for we do not see the deed until it is accomplished)" from the Pomme de Pins (Pinecone) issue of Picabia's Dadaist journal 391 (1922), in which he denounced the doctrinaire posturings of the nascent surrealist group. The smaller gear credits Picabia.

Eight years after Picabia's disassembly of time, Heisenberg's famous paper on uncertainty appeared in Zeitschrift für Physik. Einstein's comforting "world lines" were shattered. Observation itself - just looking - fractures time's continuity into jagged rubble, the chunks scattered irregularly. In our fury for order we gather them up and arrange them as best we can into broken lines. We squint and strain to reconnect the broken bits. But we know that anything can happen in between.

Acrylic and wood ash on unstretched canvas and hardboard. Twelve panels, each 24" by 24". Exhibited at an open studio event, May 1, 2005. Collection of the artist.

The conversation was conducted and recorded between Thursday, April 7 and Wednesday, April 20, 2005.

The background images illustrate a fable of the power of nature, and announce my faith that nature will prevail. They constitute, in effect, a warning. The narrative plays out in the interaction between pairs of facing panels. The transformations depicted on the right-hand panels (Nature) can be seen as causing the events depicted on the left-hand panels (Human fantasies of power and dominance), which in turn drive the right-hand transformations.

The dialog itself is overlaid upon this narrative, and interpreted as hexagrams according to the I Ching. As with any oracular text, the interpretation is obviously ambiguous; the hexagrams can be read vertically (as depicted) or horizontally (as actually thrown and recorded). The text can also be read as an encoding in Morse, ASCII, or any number of other digital codes, with or without phase shifts, replacements, or other tricks. Representatives of the National Security Agency (NSA) were interviewing on the NMSU campus while the dialog was being conducted; I reflected often on the analogies between their task and mine.

Twelve hexagrams per panel on each of twelve panels yields 144 hexagrams. Each of the 64 possible 6-bit arrangements can be expected to appear an average of 2.25 times, assuming fair coins fairly tossed. Hence occurrence frequencies of 2 and 3 are to be expected; 1 and 4 are notable but not surprising, 0 and 5 or above are oddities.

Four hexagrams do not appear at all in the vertical reading: # 3 Difficulty beginning, #12 Stagnation, # 52 Mountain (like the tower, indicative of male strength), and # 56 Wanderer (a hexagram concerned with prudence). The most frequent hexagrams, at six occurrences each, are #37 Family (the human race, or all of life), #54 Marrying Maid (Nature herself), and # 58 Joy.

Make of that what you will.