The data on collaborative links up to Erdős Number 2 used to construct this subgraph are from the 2010 records of the Erdős Number Project. The additional data are listed below, keyed by the edge labels shown in the subgraph.

An interesting feature of the graph of my Erdős lineage is that it is composed entirely of cycles: every vertex is between at least two other vertices. Cycles indicate interactions between members of different academic lineages. The subgraph below shows another cycle that combines molecular biology collaborations with nuclear physics collaborations; the unlabeled links are again from the Erdős Number Project. In How small is the center of science? Short cross-disciplinary cycles in co-authorship graphs, I show that short cycles like this one cross many boundaries between scientific disciplines. This leads to a question: how "real" are the disciplinary boundaries that are often taken so seriously? 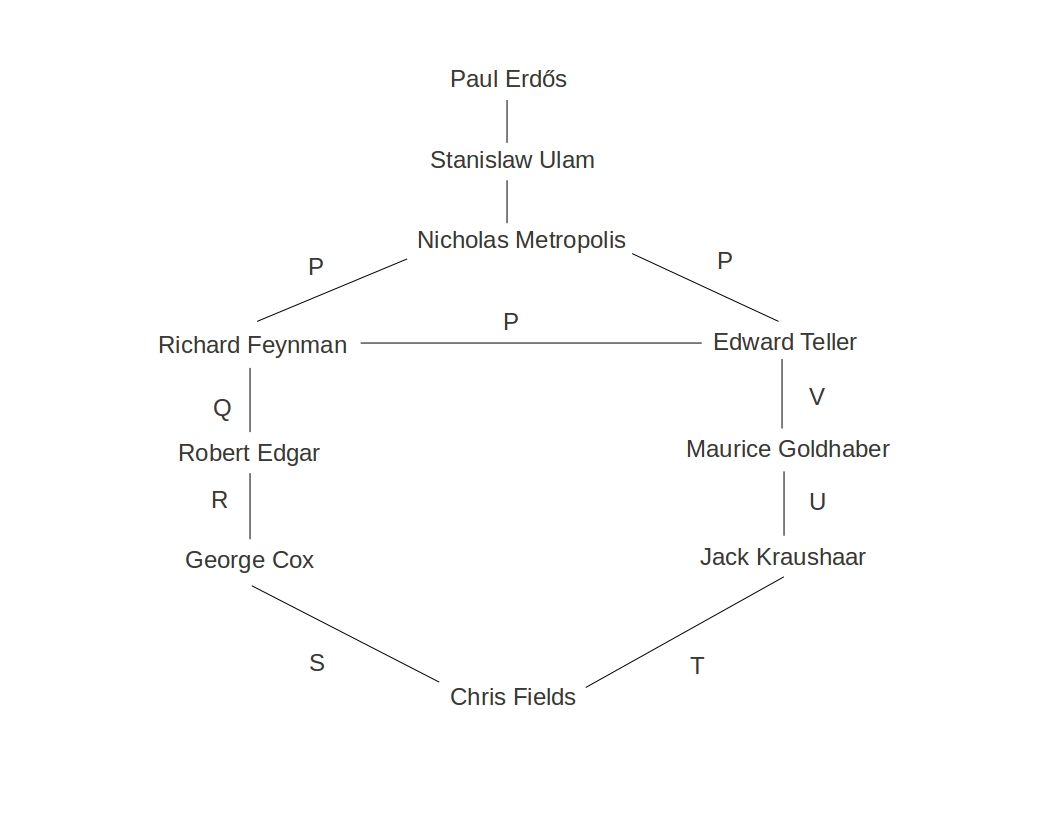 The boundaries between disciplines

Nobel prize winners and other prominent scientists are naturally regarded as "central" to their disciplines. In Close to the edge: Co-authorship proximity of Nobel laureates in Physiology or Medicine, 1991 - 2010, to cross-disciplinary brokers, I show that Nobel laureates in biomedicine are also close to the boundaries of biomedicine - on average, less than three co-authorship steps away. Co-authorship proximity of A. M. Turing Award and John von Neumann Medal winners to the disciplinary boundaries of computer science shows that recipients of either the A. M. Turing Award or the John von Neumann Medal in computer science are even closer to the edges of their discipline. The graph below, from Nobel numbers: Time-dependent centrality measures on co-authorship graphs, shows a small section of the boundary between the biomedical sciences and physics containing co-authorship paths that traverse either me or my colleague Eric Lander. Nobel laureates in either Physiology or Medicine (lower part of graph) or Physics (upper part of graph) are indicated by two-digit award dates. Being close to the boundaries of their respective disciplines makes these Nobel laureates close to each other. Do other boundaries between disciplines also look like this? If so, what does this mean for the "shape" of disciplines in co-authorship space?

Any of my collaborators can use the subgraphs above and the references below to establish that his/her Erdős Number is at most 4, as well to discover perhaps surprisingly short paths to many other scientists.